This is a profile of a very interesting new project coming out of Romania, aiming to make government finances understandable for the average citizen. It is written based on contributions from Elena Calistru, who kicked off the project. 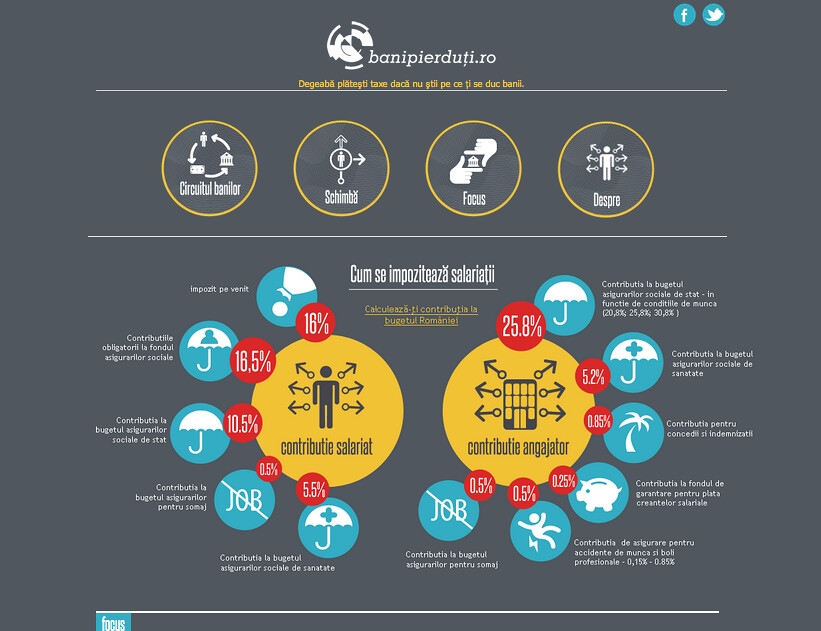 Starting at the beginning of August 2011, 104 projects were registered for the Social Justice Challenge Restart Romania and went under the scrutiny of the community. In the end, a jury formed by representatives of the diplomatic community, business sector, and IT industry decided the selection of 10 finalist projects. Between 28 - 30 October, the Restart Romania Hackathon transformed the ten ideas with the help of programmers and communication specialists into more concrete platforms which were presented within the Restart Romania Gala. Bani Pierduti was voted within the Gala as one of the five winners of 5000 USD funding.

The project formerly known as “Where’s my LEI, man?” entered the competition aiming to centralize publicly available financial information regarding the projects financed through public money (budgets, annual reports, etc.). The main objective was make authorities accountable in the manner in which public funds are spent.

After winning the Restart Romania Gala, the project went through a re-thinking aiming to identify both the best technologies for a more complex platform than initially planned and the necessary datasets which would allow the best representation of how public funds are spent in Romania. If at the very beginning the project only aimed at using state budget data, it now operates with data comprising the budgets dedicated to social assistance and public health, the budgets at local level for the Romanian counties, projects financed through EU funds, comparisons with the percentage allocated to various sectors in other EU counties, and more.

The project is a now a permanent programme of a newly-established NGO, Funky Citizens (website under construction at time of publication), which aims to engage civil society (taxpayers) in the decision-making processes related to public funds through the use of technology. Its major objectives are:

To achieve its objectives, the project relies on three pillars:

Problem #1: Fiscal policies represent a mystery for the majority of citizens

Problem #2: Little or no participation of the community in fiscal policy

Consequences: Limited use of existing tools for participation to the decision-making process; needs of the community not reflected in the resource allocation; no feedback to the policy makers on their decisions

Problem #3: Lack of vision from governments on investment / development priorities 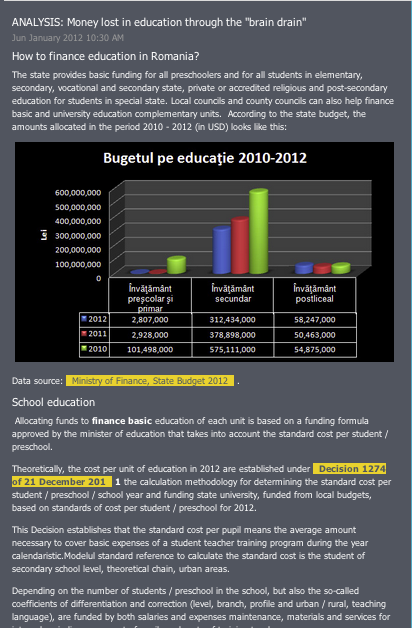 The role of technology is an important one, since the web-based platform is the main feature of the project. So far, transparency in fiscal policy can be achieved only through complicated documents published on the websites of the authorities or through FOIA requests. Also, there were previously no e-participatory budgeting experiences, the only means of organizing public debates on budgetary issues being offline events.

The main challenges to the project are mostly related to two major issues encountered by such initiatives: 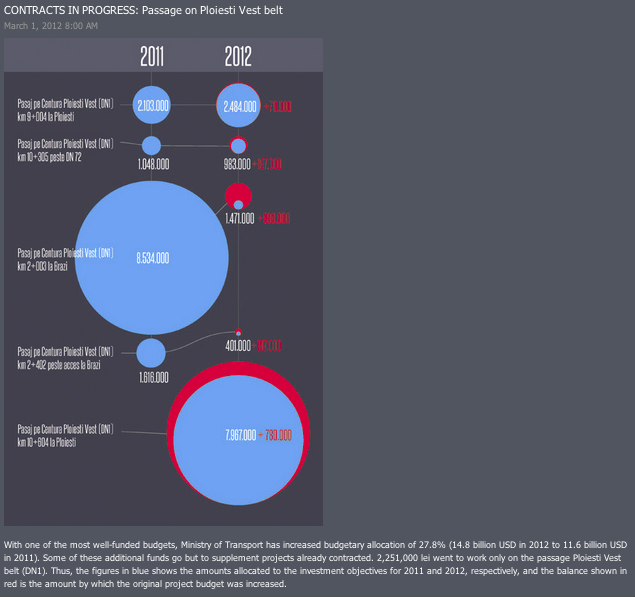 Romania has just joined the Open Government Partnership, and the implementation of the open data format for governmental data sets is expected to take at least a few years. The various data formats present on the websites of authorities, or even their absence in several cases, made data collection a rather difficult process.

The project also foresees that an entire pillar of the platform (“public participation”) will actively seek the involvement of the user groups. The implementation of this service started with two features (large investment projects timelines and legislative early warnings) which seek an interaction with the public, and future plans propose to increase the amount of citizen participation. For example, there are plans to do this by:

The project was planned as a continuously growing platform, and its scaling or additional features were taken into consideration from the very beginning. A mobile feature is expected to be implemented into the web platform in 2013, a plan which also involves the use of social audits for public contracts.