After years of conflict in the Democratic Republic of Congo, many are unable to access the most basic of public services. While many citizens in the province don’t have access to water or electricity in their homes, they do have mobile phones. The World Bank Institute’s ICT4Gov program has introduced[m] mobile technology to enhance participatory budgeting processes to help local authorities decide on the allocation of available resources according to citizens’ priorities. In a community-chest style process, the local government devotes a percentage of the local investment budget to the project deemed most important by the citizens.

The World Bank played the role of facilitator in a number of spheres for the project - they tailored software, negotiated with cellphone operators and built capacity to demonstrate to local populations how the technology works. In each use-case, the Bank provided the local community with a portfolio of options that technology could offer and allowed the community to decide for themselves which options to deploy. The Bank was also instrumental in other processes such as drafting the text messages which were used to contact constituents and building capacity in understanding the budget. In the case of the Democratic Republic of Congo, the Bank played a role in bringing local governments, civil society, universities etc. together to work out how to implement these projects.

The Role of Technology

Besides the blanket approach, the Bank is also experimenting with manually collecting phone numbers (this was done in the Dominican Republic). When collecting numbers, it is also possible to collect basic information about the person in question, such as their gender, and the neighbourhood they live in, so that targeted messages can be sent out (e.g. low attendance rates from women can be counteracted by sending invites just to women.) So far, the Bank have sent around 2000 messages this way compared to 300,000 through the blanket approach. 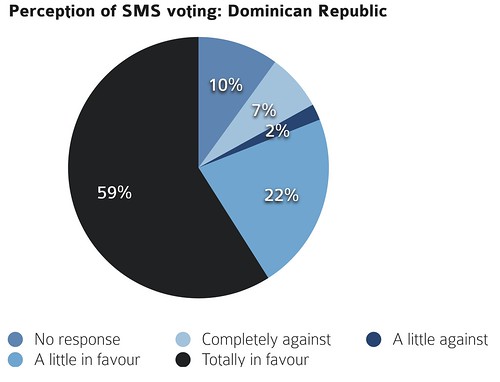 Voters in the Dominican Republic were asked how they felt about having the option to vote remotely via SMS.

There are 1500 cities around the world where participatory budgeting already takes place, and this approach could be considered as an option in them. Using mobiles could be used to encourage citizens is an approach that could be used in other contexts to promote citizen participation, not just PB. In some countries, such as Estonia, mobile voting has already been used in municipal elections and could be extended to other contexts. 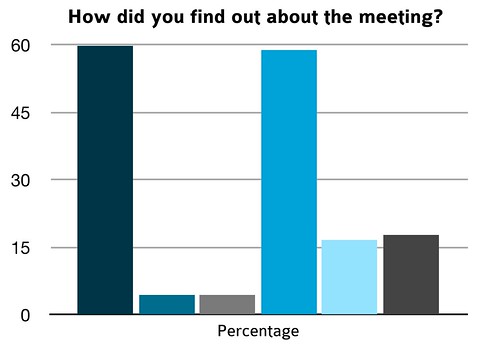 Participants in the Dominican Republic were asked how they had found out about the meeting.