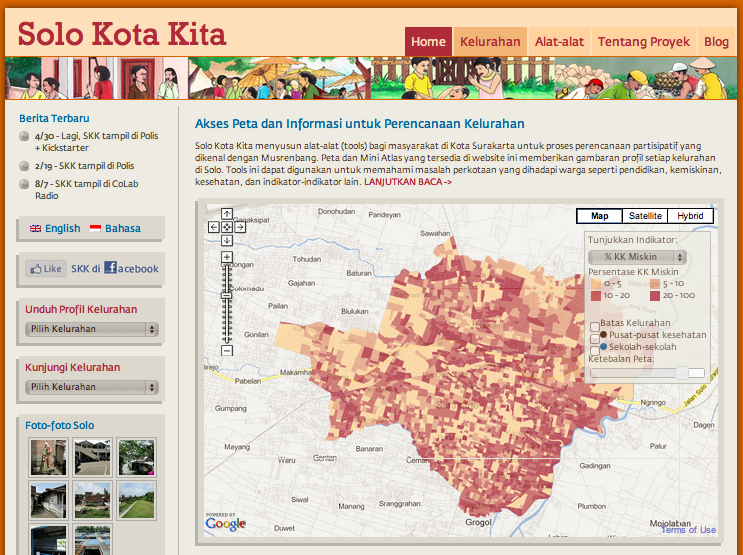 In 2001, Indonesia underwent ambitious decentralization programs. The “big bang” reforms devolved political, administrative and economic power to smaller administrative units, and local actors took over management of municipal infrastructure and systems. Against this backdrop, the national as well as local governments developed and supported new planning processes that sought to increase community participation in government decision-making.

Participatory budgeting (known in Indonesia as Musrenbang) was piloted by a group of NGOs in Solo for the first time in 2001. In 2005 the national government mandated that every region and city in Indonesia implement an annual Musrenbang process. As part of the Musrenbang process, residents in a city or region meet to prioritise and propose short-term improvements they’d like local government to implement in their neighbourhoods.

While participatory processes such as Musrenbang are in place, in many cases local authorities and communities lack capacity or tools to maximize the collaborative decision-making opportunities these processes offer. For example, priorities set during Musrenbang meetings don’t always correspond to the most urgent requirements of a given neighbourhood. SKK’s first project sought to tackle this issue in Solo by increasing awareness of urban issues to strengthen residents’ voices and their capacity to prioritise community issues during the Musrenbang process.

The tool, ‘the Mini-Atlas’, presents a map and thematic information about each neighbourhood in Solo. Each atlas includes a map of community facilities (responding to local feedback that often the participatory budgeting meetings happen without a map of the neighbourhood) and thematic data regarding education, water, sanitation, housing, poverty, and health, highlighting key assets and issues for residents to discuss.

Data Collection and Analysis Methodology Solo city government had never collected the information included in the mini-atlases, let alone aggregated it through GIS and disseminating it more widely, but the administrative organisation of all cities across Indonesia, including Solo, facilitates the collection of this data.

Each neighbourhood in Indonesian cities is formed of administrative units called RTs (roughly equivalent to a US Census Block). A “block captain” keeps track of how many people live on the block, how many poor families, etc. SKK put together a team of community facilitators that liaised with the 2,700 “block captains” in Solo to collect the information to populate the mini atlases. As such, each mini-atlas provides a highly detailed profile of each neighbourhood.

Working with data: GIS mapping and analysis, design of the mini-atlases, website with searchable information from the atlases. (local GIS consultants and a California-based firm to produce SKK website) - 6 months total over a six-month period.

Note that following the data collection, SKK found differences in the collected data compared to official statistics e.g. the official population estimate is lower than SKK’s count. Rather than SKK having over-estimated the population, it seems more likely that some people were not counted in the official census, perhaps due to dissemination problems, illiteracy, or inadequate follow-up procedures. While such data discrepancies exist, they are generally not critical.

The experience with the data collection emphasises that this methodology is replicable. As discussed in ‘Follow up projects’ SKK will attempt to replicate the initiative in Solo and Makassar, adding an innovative SMS data collection approach.

On the Ground Implementation: Using the Data

During the 2011-2012 Musrenbang cycle, SKK staff conducted refresher training for Musrenbang facilitators. Unlike the previous rounds, in four of the 10 neighbourhoods, SKK staff worked with neighbourhood leaders and facilitators to develop a second-generation mini atlas. The latter, known as MA+, sought to amend/ augment the original neighbourhood mini atlas with information that community members noted would enhance the effectiveness of the tool. For example, in one neighbourhood, feedback included adding information about small businesses within the mini atlas.

SKK has begun a Musrenbang budget analysis initiative with the aim of increasing transparency and developing new planning tools related to the outputs of the Musrenbang process in Solo. To achieve this aim, SKK is reviewing and comparing the lists of proposals made at the RT levels to the respective final city budgets, to determine which projects proposed through Musrenbang were selected and implemented. Ultimately, this information could be utilised to develop maps that visually highlight what type of projects were proposed and where, as well as which were implemented in previous years.

Additionally, with funding from the Ford Foundation, SKK will begin collecting RT-level information from each neighbourhood utilising an innovative SMS data-capturing methodology. Specifically, instead of community facilitators and “block captains” filling out paper forms to aggregate data, SKK will pilot an approach by which the data collection can be conducted using an SMS based cell-phone application. In addition to conducting this work in Solo, SKK will also implement the project in the city of Makassar.

Additionally, it is important to note that the project had the support of the Solo mayor. The government worked with SKK to engage the neighbourhood heads to support data collection.

Thanks to Hector Salazar Salame and Michael Haggerty (SKK)