Participatory budgeting (PB), put simply, gives citizens direct input into how government money is spent, for example via budget consultations or in-person meetings. PB occurs in over 1500 cities over the world, and there is a Google map, which shows (marked with red pointers) locations which have favoured a technical solution, referred to here as ‘e-PB’.

For government officials interested in e-PB, the Participatory Budgeting Unit have produced a useful paper including a list of considerations which governments should take into account. The collective knowledge of the Participatory Budgeting Google Group is another useful resource for anyone seeking advice on implementing PB, using technical methods or otherwise. Many members of the group develop e-PB systems, and the group has built a census of existing technical solutions.

The census shows that there are a large number of competing software solutions (both proprietary and open-source) but no real consensus on a particular approach to implementation. When it comes to building a software tool for a process as complex as participatory budgeting, perhaps one size does not fit all. In what follows, we have sought to determine activities in the PB process for which the projects in the census may be able to provide solutions.

At the end of this section, we present three in-depth case studies of different technical solutions.

The following bullet points highlight key activities in the PB cycle and outcomes which some of the case studies highlighted in this section seek to target:

This section highlights existing initiatives which take advantage of the opportunities highlighted in the section ‘PB Activities targeted by technology’ . 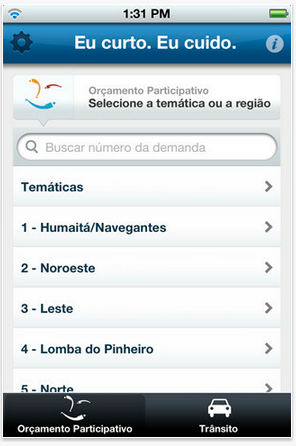 Following the progress of projects

Concerns about using technology in PB

The concerns below were voiced about using technology in PB by those both inside and outside governments:

e-PB: What can policymakers do to help projects such as these succeed?

This section has dealt mainly with tools for direct participation, as opposed to indirect participation, where citizens choose their preferred policies via the proxy of an elected representative. In the latter case, there are also ways in which governments can help to promote informed decision-making in electing their preferred candidate. For example, by releasing structured information on voting records of a given candidate. In countries such as Kenya, where individual politicians hold sway over a large discretionary fund (Constituency Development Funds), having access to information on an individual’s previous financial behaviour can be crucial to selecting the correct representative. See this post on ‘Auto-generated campaign speeches’ for one suggestion of a project to compare candidates based on their financial track-record.

Many of the projects in this section are civil society led and are listed here to provide inspiration for some of the ways in which technology may be used to promote greater citizen participation around budgeting issues. However, these efforts can only go so far without support from governments. The following section highlights a couple of ways in which governments could promote such projects as these.

Promoting public participation in the annual budget cycle, and in the design and delivery of public services and public investment projects