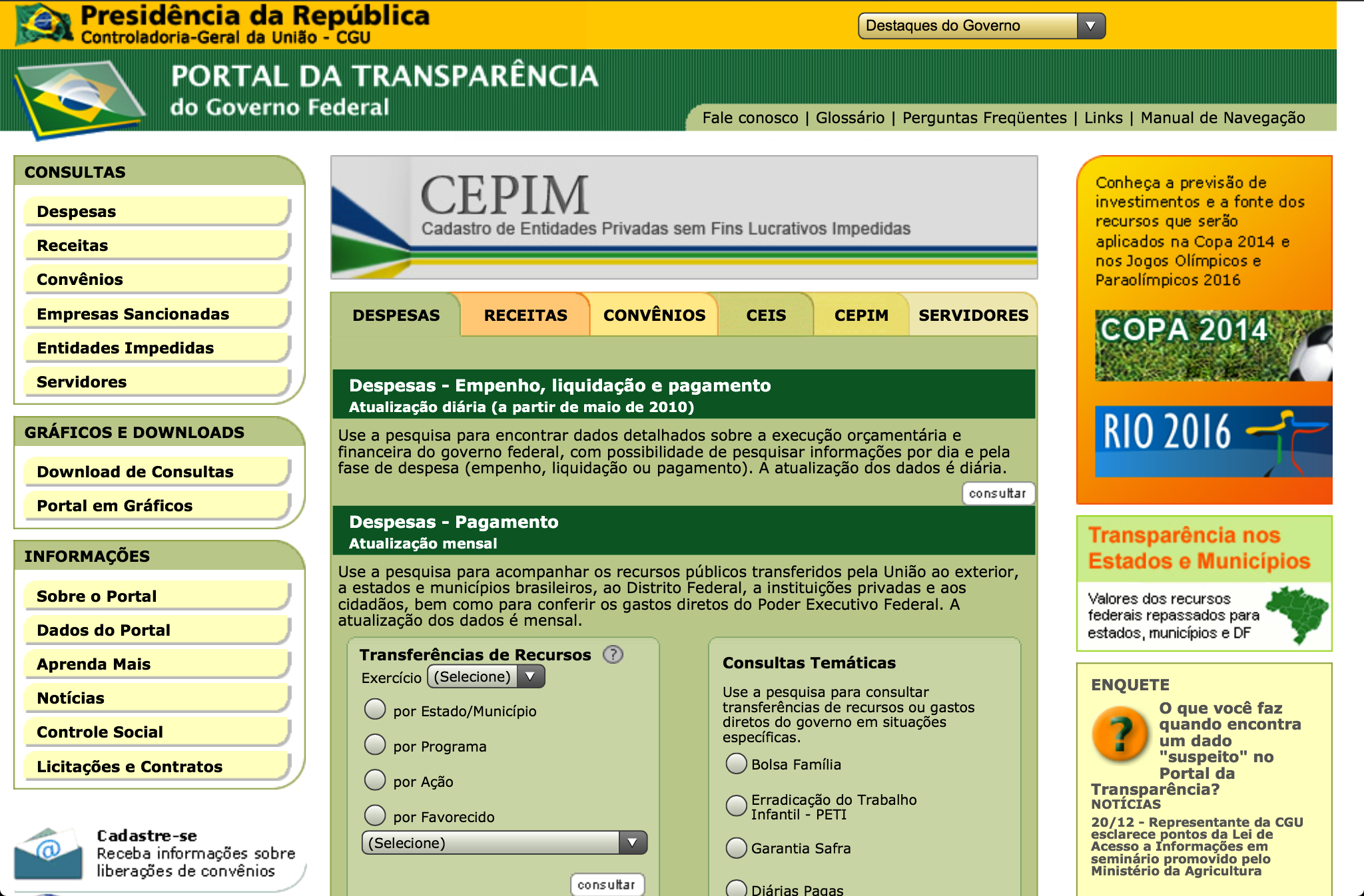 In 2004, the Brazilian Office of the Comptroller General (CGU) created the Transparency Portal, a tool that aims at increasing fiscal transparency of the Brazilian Federal Government. Developed in partnership with the Federal Data Processing Service – SERPRO, the Transparency Portal relied on the collaboration of diverse Ministries and bodies of the Federal Public Administration to advance the transparency of information on the application of federal public resources and to offer a tool that can stimulate citizen participation. The Portal brings, in simple language, detailed information about how public resources are spent. It is known as one of the most important tools of e-government in regard to public spending control.

Overview of Other Resources and Features

The Portal registers an average of 410 000 monthly visits. The number of citizens accessing the Transparency Portal has grown from 10 000 to 336 512 per month, between 2004 and 2012. A total of 44 640 citizens are registered and receive information about resource transfer in government partnerships with 5 561 municipalities. Information is sent to registered users via email.

There have been a number of concrete cases where the Transparency Portal has supported direct social control of government activities. At the beginning of 2008, Brazil’s domestic media published numerous reports about “suspect” expenditure made using federal government Payment Cards. In one case the reports led to the resignation of one federal minister. In other cases the portal’s data has given rise to unsubstantiated media reports.

The Transparency Portal will only be successful if a variety of stakeholders are engaged in anti-corruption efforts. Citizens, non-governmental organizations, press, private sector, academic institutions, think tanks and other civil society actors have an indispensable role to achieve the project’s effectiveness. To improve the interaction between government and civil society, the Transparency Portal discloses a communication channel: “Contact us”. Through this channel, the Portal users can elucidate any doubts related to the accessibility or to its own content, as well as praise or make suggestions. Through this channel the Portal also receives many suggestions for improvement and denounces of misuse of public money.

Monitoring and evaluating the impact of the Transparency Portal is an evolving area. The Office of the Comptroller General of the Union measures the average time spent on the website, as well as its bounce rates, pages per visit, visitors, most demanded searches, among other data. Access numbers have been used to identify demands for different queries and the depth of information researched by users. This analysis allows web managers to prioritise the most requested information in the layout. Bounce rates can be used to improve e.g. the frequently asked question section.

The Portal is administered by a Management Group and a Working Group (operational), composed of representatives of the areas of Corruption Prevention and Strategic Information, Internal Control and Information Systems, approximately 12 public officials (including Managers and operating team, most of them part time). In addition, there is a Technical Technology Group in total approximately 10 public officials working directly to Portal. This makes use of Public budget resources of the Federal Government.

Thanks for input from Izabela Moreira Correa, CGU