This post is by Friedrich Lindenberg, developer on OpenSpending.

“My Name is XXXX, I am a member of the Kenyan parliament for the constituency of XXXX in the 2007-2012 election cycle. During my time in parliament, I have positioned myself against taxes for MPs.

The largest projects I have funded include… “

Auto-generated, spending data-driven campaign speeches like this are just one of the many ideas of the Data Bootcamp that took place in Nairobi last week. Invited by the African Media Initiative and the World Bank Insititute, about 70 participants - both journalists and developers - met on Strathmore University’s campus to learn and practise both the skills and tools required for data-driven reporting.

The four-day programme combined tools training with practical work in small groups. Elena Egawhary (BBC NewsNight) gave a workshop on data analysis in Excel, Sreeram Balakrishnan (Google Fusion Tables) introduced both Refine and Fusion Tables. Team members from both the Kenya data portal and the World Bank finance site presented their respective offerings, while Gregor and myself from the OpenSpending team gave intros to web scraping and advanced map visualisation. 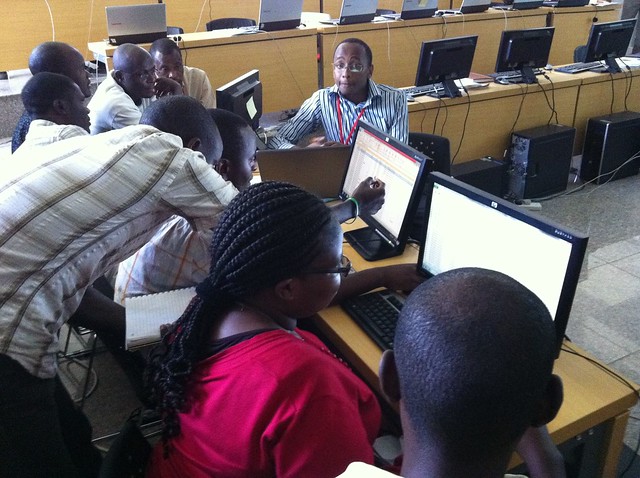 During group work, journalists and developers teamed up to try their newly learned skills in different domains ranging from sports (football player profiles) to education (missing toilets in schools, “The Shit Ordeal”) and the financial transparency story-telling mentioned above.

The workshop also served as a community-building event for Kenya’s young and impressive Open Data initiative. Future events, aimed at civil society organisations and polictical actors will help to further promote the re-use of government information released through the initiative.

All this is happening in a place where transparency is an essential tool to be developed: Not only is the access to information now guaranteed by the 2010 Kenyan constitution, there are also major political issues that deserve close attention from local and international watchdogs. These include not only the ongoing incursion of Kenyan troops into Somalia in an effort to fight Al-Shebab terrorist groups, but also the upcoming nationwide elections in December 2012. The elections will instate a new bicameral system of government, with many previously unknown candidates standing for office. In the previous 2007 vote, bad polling station data had quite literally led to widespread unrest and thousands of deaths across the nation.

In all, it was a fantastic to get in touch with the Kenyan participants of the workshop and to see how the organizers of the event - a brilliant team including Craig Hammer, Justin Arenstein and Jay Bhalla - are working to foster an open data community in this bustling developing nation.Given the great ideas generated during the team sessions, I’m sure this work will soon bear its first fruits.